Pedestrian bridges in urban environments are a way to bring some areas closer to pedestrian circulation and often reduce the paths and times that people take to travel a certain route. In the design and construction of these crossings it is necessary to take into account several things that can condition the structure and its surroundings.  The negative effects that may arise from the appearance of a pedestrian bridge on users, habitants and local shops must be mitigated. Only then can you have a crossing that fulfills its purpose with reduced side effects.

The location of the bridge must be analyzed in such a way that it meets its objective, with a framework in the surrounding landscape and without changing the visibility of another communication routes or infrastructures. In addition, particular attention should be paid to areas protected by the environment and the constraints associated with this, as well as the existence of buried infrastructure or low-capacity soils. All of this can be important constraints that must be analysed at the time of choosing the location of the bridge. 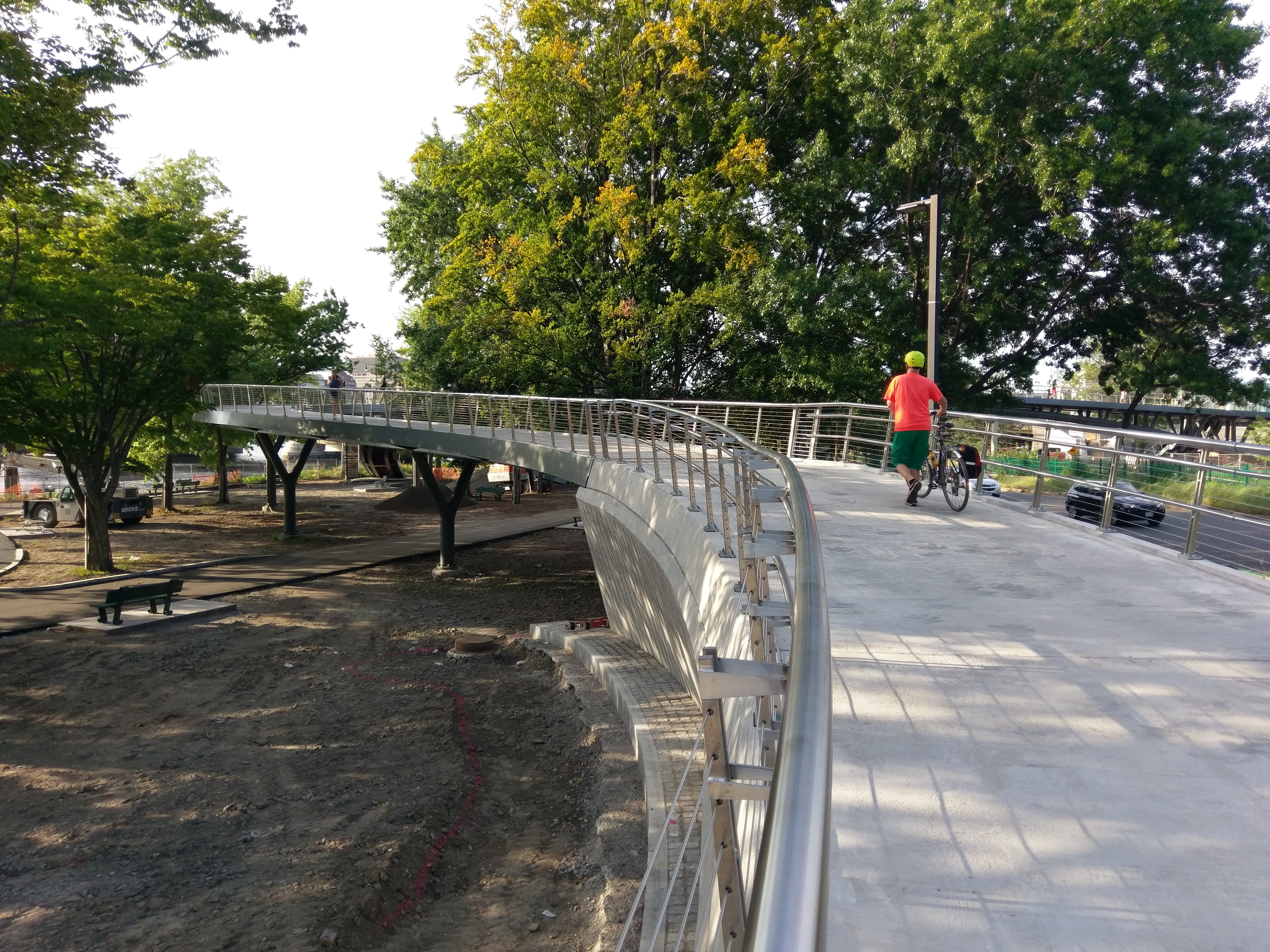 Users, both pedestrians and bicycles, should be the focus of the design of a pedestrian bridge. For them to use the structure and feel comfortable in its use, it is necessary to put ourselves in the eyes and mind of the user and understand what we would do and how we would feel in that situation. Connections between the bridge and adjacent sidewalks should be made with smooth transitions, using the most direct connections possible, to avoid shortcuts by users. In order to pass 2 people on the bridge, the minimum comfortable width is 1.50m, and can be reduced up to 1.20m in cases of very short bridges. In the case of use by two-way bicycles, this width should rise to 2.40m minimum, with an overwidth in curves that can reach an additional 0.50m.  With the existence of bicycles on the tray, a minimum radius of curvature of 5 meters should be used in its design, so bicycles can cross without stopping. Access ramps must have a flat level every 1 vertical meter of ascent. 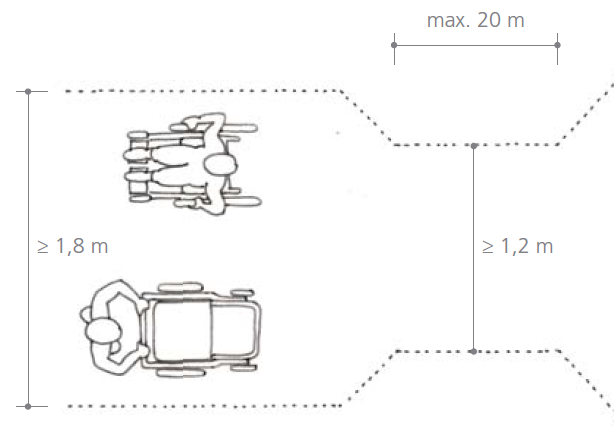 The displayed values are only references that can be used. The design of a pedestrian bridge depends largely on its surroundings and as such an analysis of the movement and flow of pedestrians/bicycles on site is necessary to determine the dimensions and design that allow comfortable and safe use of the structure.

Both the pedestrian and the accesses must have the lowest possible slopes. Both pedestrians and bicycles avoid inclined routes and thus, for the use of the bridge to be possible, it is necessary to adopt reduced slopes and the longer the bridge, the more reduced slope must be used. The maximum recommended slope is 6.67% but on routes with long lengths, the use of such a slope can lead to non-use of the route in the upward direction. S-shaped circulation may be adopted to reduce the slope, but attention should be given to the fact that users can be forced to take a longer journey.

The handrails are important elements in pedestrian bridge, both from the point of view of safety and the aesthetics of the structure. A minimum height value of 1 metre can be used in the case an exclusive pedestrian use but when we have a bridge with people and bicycles, the heights must be not less than 1.20m. For the safety of children, below 70cm in height the openings must be limited to 10cm.

For the structural design of a pedestrian bridge, the national regulations in each country must be used. Nevertheless, there are some points that are transversal to all countries in design, such as the need to consider accidental collisions of vehicles or boats with the bridge tray or with the support columns. This is a relevant and important accidental action in many cases. In addition to the vertical loads resulting from the use of the bridge, other important points are the action of the wind and vibrations. Wind, especially in suspended trays, plays an important role in creating dynamic effects that must be analyzed. Vibrations, both because of the wind and due to the normal use of people on the deck, is something that must be analyzed to avoid the creation of vibration states that resonate with the actions applied on the bridge by people and wind.

Throughout the process of designing a pedestrian bridge, costs must always be on the table and play an important role in the analysis of different solutions. The use of structures with simpler and more modular configurations leads to a cost reduction as more complex structures, with nobler materials or movable structures, lead to a higher overall cost. The costs per square meter of bridge deck, for this type of structures, usually vary between 1000 € and 6000 €.

Pedestrian bridges should have a strong focus on the user when the global design is done and a major focus on costs when analyzing the more technical things. This is the method used by Slefty to design and put at the service of society, pedestrian bridges with high positive impact for populations.